KEN NAPZOK
ORDER WHY WE LOVE STAR WARS!
NOW AVAILABLE AS AN AUDIO BOOK!  ORDER HERE!
Jay Gabler of The Tangential calls Why We Love Star Wars "compulsively readable" in his review!
Celebrate the greatest saga ever told: All of us who are deeply influenced by the epic saga of Star Wars have our favorite moments. Each time the screen goes black and you see those words― “A Long Time Ago, In A Galaxy Far, Far Away”―the music blasts through you and you’re a kid again. Ken Napzok, expert appreciator of Star Wars, counts down each one of those special moments that makes this series not just the best movies of all time, but the Greatest Saga Ever Told.

​Become a scholar of Star Wars: What began as one movie about good people, evil oppressors, and the space wizards that stood between them has exploded into a franchise. The moments that continue to inspire are on screen and in the pages of novels. They are found in the panels of comic books and among animated sequences on television. And they all continue to grow in stature, importance, and myth through discussions, debates, and daydreams.

The Perfect Star Wars Gift: Spread the love to old and new fans. Countless numbers of us have been inspired by these classic epic tales, and we all have a favorite moment that hooked us. Rediscover each one of those moments and share them with the last and next generation of fans. This Star Wars book is the perfect Dad gift, Mom gift, Niece gift, Best Friend gift, and general token of appreciation for the fans in your life.
​
Why We Love Star Wars: The Great Moments That Built A Galaxy Far, Far Away is a shared story of fandom. 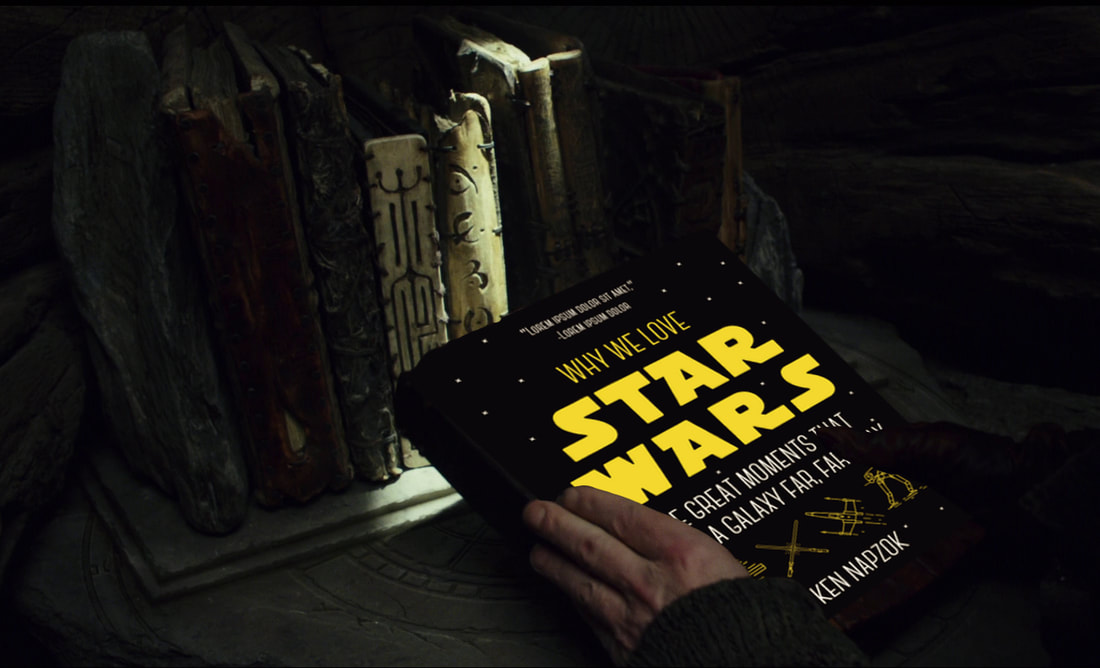 REVIEWS FOR ​WHY WE LOVE STAR WARS

​Why We Love Star Wars will transport you right back to the bliss of watching Star Wars for the first time. It’s a reminder of the impact this fantastical world can have on any race, culture, or personal experience. It’ll make you fall in love with Star Wars all over again! - Andres Cabrera, Producer/Host The Meaning Of podcast

“The Force is “an energy field created by all living things. It surrounds us and penetrates us; it binds the galaxy together.” So is the power of Star Wars. Ken Napzok captures the essence of that power from Star Wars with every word. Ken binds us to our childhood, our feelings, and memories caused from the galaxy far far away with every word he writes. The Force is strong with Ken Napzok.” - the “Greek God” Dimitrios Papadon, Pro Wrestler

“Ken Napzok is one of my favorite people to geek out about Star Wars with. Being a part of Jedi Council with him always ranks super high in this geek girl’s highlights list. I am so happy that now everyone can have Ken’s Star Wars wisdom in a collected intergalactically awesome book.” - Tiffany “Smithlord” Smith, actress/ host

“With his deep well of knowledge and heartfelt respect for the fandom, I can think of no one more qualified than Ken Napzok to connect readers to the love of Star Wars. If for no other reason, the fact that Ken has the ability, raw power and sheer force of will to beat Sam Witwer in a Star Wars trivia contest simply terrifies me.” ― Jennifer Muro, Television writer, Star Wars: Forces of Destiny

“Because of Ken Napzok and this book, we can sound like we know what we’re talking about on our Star Wars talk show.” - Stephen Ellis and Alex Backes, Black Series Rebels

“Reading this book I discovered that Ken not only has the beard of Obi-Wan Kenobi but also the storytelling flair of C-3PO, and he had me hanging on his every word like an Ewok. This is the Star Wars book I’ve been looking for.” - Jamie Stangroom, director - The Empire Strikes Door.

Why We Love Star Wars is THE book for the Star Wars fan… the new fan, the young fan, the old fan, even the fans who have yet to discover the magic. Ken Napzok reminds you, again, of the magic of Star Wars discovered as a kid and later, put into practice as an adult. Its dissection of themes, its playful ability to expand on what you already know, and its capableness to teach you even more proves this is the quintessential book on Star Wars. It also reinforces one truth: Star Wars is for everyone. - Mark Reilly, writer/ producer/ host of The Reilly Roundtable.

"Even though this book isn't about the show, Get a Life, I still learned a lot about Star Trek. Plus, Ken has dirt on me so I felt this quote might appease him" - Nathan Hamill, Artist, Teek enthusiast, star of The Phantom Menace and The Last Jedi.

"Ken Napzok is the ideal Star Wars fan. He understands the universe, characters, and themes, and knows how to express them in entertaining and engaging ways. If anyone should be writing about why we love Star Wars, it's Ken." - Alex Damon, creator of Star Wars Explained

“Ken Napzok, one of the leading thinkers in the Star Wars community, expertly reminds us all why we all fell in love with this storied franchise in the first place. In this ofttimes divisive moment of fandom, Why We Love Star Wars is an essential manifesto that aims to unite us, to bind us together by celebrating the moments that lead us into the Galaxy Far Far Away in the first place.” - Van William, Singer/ Songwriter

“Hosting the Jedi Alliance podcast with Ken Napzok for 30 glorious episodes forged some of my happiest Star Wars memories. He was the master to my padawan, the light to my saber, the hand wave to my “you don’t want to buy any death sticks.” Ken was born to write this book and to shine a tractor beam of light on his limitless love for the franchise.” - Maude Garrett, host/ founder GeekBomb and Whut fashion.

“We write about what we know about. Ken knows Star Wars. His knowledge on the franchise is second to none. Why We Love Star Wars is an exceptionally fun read returning us to the fist memories and relationships we made with the film, while preparing us to embrace what will surely be years of imaginative bliss in a galaxy far, far away.” - Frankie Kazarian, Professional wrestler, All Elite Wrestling (AEW)